Americans’ bulging waistlines have pushed the Coast Guard to increase its figure for how much an average ferry and excursion boat passenger weighs. 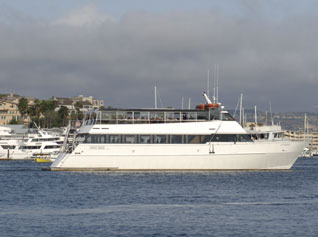 That number is used to calculate allowable vessel occupancy rates. For example, a boat with a 16,000-pound capacity could handle 100 passengers under the current 160-pound standard weight. But starting Dec. 1, the average  weight per person is jumping to 185 pounds– so, that same vessel will be limited to carrying 86 people.

According to the Coast Guard, it’s the first change in the figure since the early 1960s. Coast Guard spokeswoman Lisa Novak said simply, “People weigh significantly more now.” Roughly one-third of American adults are overweight, according to government statistics.

National Transportation Safety Board investigations in recent years have shown that underestimating the weight of passengers aboard small passenger vessels has contributed to accidents, which have resulted in injuries or deaths.

The new measure doesn’t apply to recreational boats, which are governed by different rules and standards. For example federal law requires a capacities information label — commonly called the “capacity plate” — on motorized monohull boats smaller than 20-feet in length, which specifies “do not exceed” load specifications. The information required on the plate includes the vessel’s maximum horsepower, maximum persons capacity in pounds and maximum weight capacity of persons, motor and gear in pounds.

Even though the new weight standards do not apply to recreational boats, the higher weights should be taken into consideration by recreational boaters before piling in a whole lot of large folks.