High-pressure areas are generally cool, clear, calm and stable weather systems. Highs rotate in a clockwise direction circulating out from the center. On the other hand, lows which rotate counter clockwise, circulate in toward the center, and are associated with hot air, clouds, wind, deteriorating weather, and precipitation. The winds in the center of a low are the strongest. 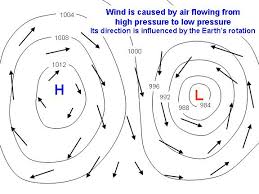 Using Buys Ballots’ Law, the opposite is true in finding the center of a high-pressure area. Again, face into the wind but this time extend your left hand out to your side. The center of the high will be slightly forward of your left hand. 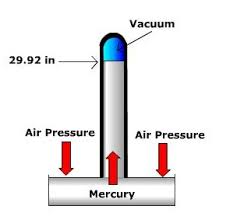 Barometers are used to measure pressure. The first barometers measured inches of mercury. These large, easily broken devices (over 30 inches in height) relied on the atmospheric pressure to force a column of mercury up a tube. This mercury-filled tube was inverted into a bowl of mercury.  The changes in pressure made the mercury rise and fall. The differences were read on a scale near the top of the tube. A one-inch square column of air weighed an average of 14.7 pounds. This average weight would hold the mercury in a mercury barometer 29.92 inches up the tube. This average pressure also could be expressed as 1013 millibars. 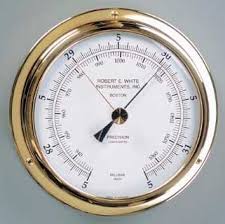 Modern barometers are the non-liquid, aneroid type. These types are made up of a vacuum chamber, attached to a needle, which indicates barometric pressure on the face of the barometer. Higher than average pressure would push down on the vacuum chamber and result in the needle being pushed to a higher reading on the face. Subsequently, lower than average pressure would allow the chamber to rise resulting in a lower than average reading. The pressure readings may be expressed in inches of mercury or millibars or both. For the most part, modern day weather forecasters will use millibars to indicate barometric pressure. Most weather maps that you see will use millibars to show pressure rather than inches of mercury.

An aneroid barograph is attached to a plotter device that allows you to continually record the pressure changes over time. Barometric pressure is constantly changing and some of this pressure change has nothing to do with weather systems. Diurnal pressure variation for instance, a small naturally occurring pressure change happens twice each day with a high and a low cycle. These variations are normally high at 1000 and 2200 hours and low at 0400 and 1600 hours. These changes are small and often are less than 3 millibars or 0.1 inch of mercury. 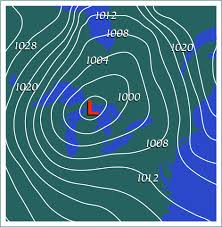 In high-pressure systems, the center of the high will contain the highest pressure and the pressures represented on the isobars will decrease four degrees for each isobar as you move away from the center.

Isobars that are closely spaced represent a rapid change and steep pressure gradient. Wind speeds will be greater in areas where you see the closely grouped isobars.

When forecasting weather, as in navigating, you should not rely on one sole source of information. The barometer is a simple and valuable tool but should be used in conjunction with other forecasting methods such as listening to VHF and SSB weather forecasts, receiving weather fax transmissions, etc.